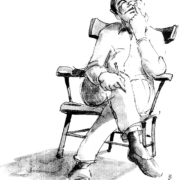 When I went to UC Berkeley, studying psychology as an undergrad, lots of people made fun of Freud, Jung, and Adler who wrote (a lot) about divergent theories of what makes people tick. UCB liked to think of itself as a scientific institution, and facts are proven by statistical validity. Why should we believe speculation from the dear departed? I eventually agreed and I was intrigued by the big question: How do we know the truth?

The paradigm that captured my thinking was the BLACK BOX. In black box theory facts are like an elephant in a box. Scientists poke sticks into small holes in the box and one stick hits a toenail. A scientist exclaims, “Why, what is in the box is hard and slippery!” Other sticks hit the softer belly or the trunk, resulting in very different observations. Hopefully, after many experiments an accurate description of the elephant can emerge. (Although, what the elephant is thinking may well remain private.)

I was really excited by statistics!

If you’re trying to know the effectiveness of something, calculating the statistical significance can help. It gives you a measured amount of confidence in the hypothetical conclusion. At UCB we did experiments and 95% confidence was the minimum that students had to achieve to get an “A.” To achieve 95%, the sample size and the size of the effect had to be big enough.

Here’s the application to stoves:

When we try to use found wood sticks from the forest in our experiments, one stick, for example, has two inches of bark on it. Another stick has three inches of bark and the two sticks make very different amounts of smoke. So, the variable of using sticks that emit different amounts of smoke makes it more difficult to know the truth: Did changing the air/fuel ratio, for example, result in the stove making less smoke? Using wood with no bark, we can achieve confidence in five to seven tests. We have to do a lot more tests when the fuel has added variables.

When trying to understand heat transfer or combustion efficiency in the lab (not what happens in the field) limiting variables has a great appeal to lazy researchers like me at ARC. So, we do not design stoves in the lab!

We realized quite a long time ago that we could only investigate heat transfer and combustion efficiency in the lab, and then with great relief go to an amazing place, work with wonderful people in a new culture, eat incredible meals, etc. in order to help a local team evolve a stove using found everything (and testing/statistics).