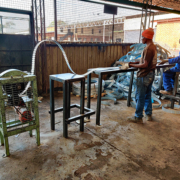 In 2013, C-Quest Capital (CQC) began distributing and installing the TLC Rocket Stove (TLCRS), a high-efficiency, long-life metal and brick improved cookstove, to the rural poor of Malawi. Early learning has resulting in many upgrades to the stove to improve sustained use and a long life. Over the past two years, CQC has installed the TLCRS in 450,000 Malawian households. Beginning in January 2020, Ener-G-Africa (EGA), a Malawian entity formed by CQC and Malawian entrepreneurs, began manufacturing all the metal stove parts for CQC’s sub-Saharan Africa TLCRS program and has since produced more than 300,000 sets of parts.

More recently, in February 2021, CQC placed irrevocable orders for the first 10,000 Jet-Flames from Shengzhou Stove Manufacturer in China, marking the first large scale commercial commitment to Jet-Flame distribution in the world. With CQC’s funding, EGA’s factory in Lilongwe is currently building the second solar panel assembly plant in sub-Saharan Africa and will begin manufacturing the solar panels, and eventually the batteries, needed for the Jet-Flame Kit.  CQC is hoping the superior cost and cooking amenity provided by the Jet-Flame will make serious inroads to the charcoal user market.

Through the growing partnership between CQC and EGA, the TLCRS will be installed on a two stove per household basis in three million households across eight sub-Saharan African countries in the next four years. Together, CQC and EGA are setting a new standard for cookstove projects in rural Africa.

Cooling Fins on a Downdraft Rocket Stove
Scroll to top