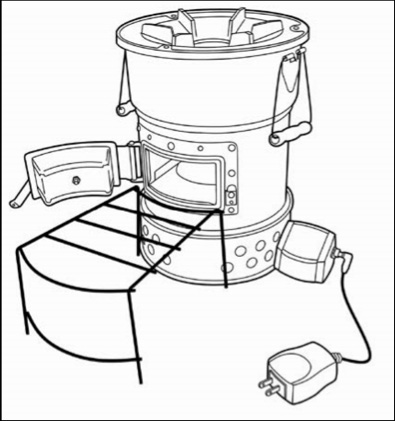 Replacing the metal combustion chamber with refractory ceramic increases durability and reduces cost. Shengzhou Stove Manufacturer is making prototypes.
Sticks of wood are pushed into the side fed stove in the same manner as in an open fire. ARC researchers did not have great success reducing emissions with jets of secondary air introduced above the fire. After many experiments, forceful jets of air were placed under the fuel blowing air up into the sticks and fire. The resulting mixing of air/fire/gas/smoke resulted in lowered emissions and the bottom air approach is fairly simple and affordable to manufacture.

Laboratory tests of the Side Feed Forced Draft stove were very promising.
Burning found and dried fuel, like sticks, has advantages including adequate turn down to simmer without making excess steam. Four or five 1cm by 2cm sticks boil water efficiently when a pot skirt makes a 6mm channel gap next to the side of the pot. Two sticks keep the water around 97C. On the other hand, compared to batch fed stoves, side feed stoves have the disadvantage that the fire must be constantly tended as sticks are pushed into the fire, as in an open fire.

At the first DOE stove conference in 2011, recommendations were made to investigate refractory ceramics. Refractory metals are expensive and contribute to making stoves too costly for many developing world markets. Mr. Shen, the owner of Shengzhou Stove Manufacturer in China, sells millions of coal burning cooking stoves (1200C) with inexpensive refractory ceramic combustion chambers. Wood burning stoves are cooler (850C) so we hope the process will be relatively straightforward.

As many folks know, Kirk Harris has invented some of the most advanced natural draft TLUDs. Kirk is here for the next two weeks using the emissions hood to increase the turn down ratio while maintaining very low emissions. His goal is to create a natural draft biomass stove that is as easy to use as a gas stove. It’s possible that electrically powered fans may not be needed for cooking stoves that achieve ‘Tier 4’ metrics. Good luck, Kirk! 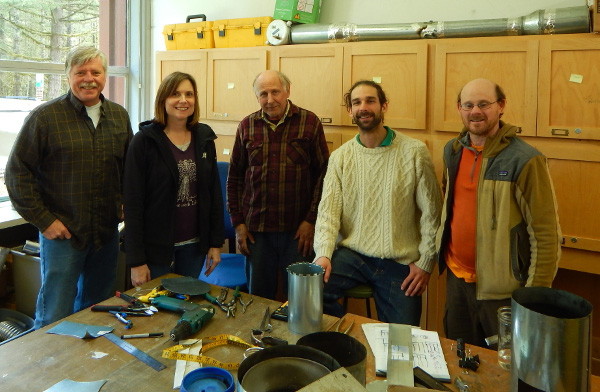 Kirk Harris, center, joins the team for two week to prefect his natural draft TLUD. Motivated individuals are always welcome to study at the lab.