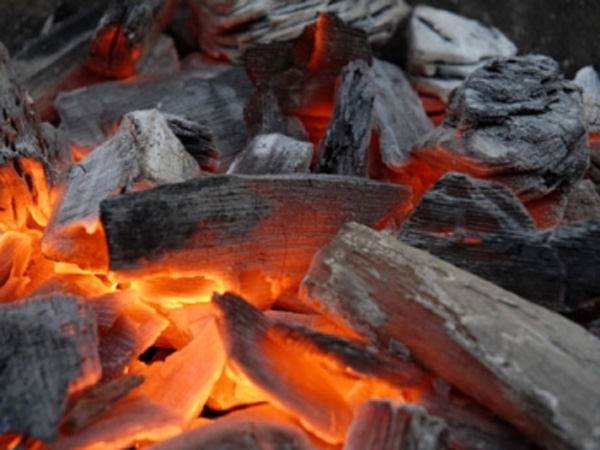 Charcoal Reconsidered
Yesterday we tried a new charcoal stove and were impressed with both the ease of use and the lack of smoke. The stove used around 350 grams of charcoal to boil five liters of water and then simmer the water for forty-five minutes. Testing charcoal stoves is a pleasant change from burning wood. They take care of themselves and are similar to cooking with LPG. You light the stove and let the cooking continue without having to constantly tend the fire. It’s no surprise that charcoal is a preferred fuel in many urban locations.
That convenience, however, comes with a considerable energy price tag. Turning wood into charcoal can waste 5/8ths of the energy in the wood. Wasting that much energy is hard to rationalize when thinking about fuel efficiency. On the other hand, after the stove is lit, well made charcoal without bits of wood in it emits a lot less smoke than wood fires. Dr. Rob Bailis suggested that using charcoal could protect health by reducing exposure to PM by 90%. Science 1 April 2005: 98-103. Scenarios can be imagined in which charcoal is made sustainably, but to date, charcoal production continues to be problematic. It is interesting that a majority of carbon credit projects involve charcoal stoves. The Jiko stove and the New Lao stove are generating millions of carbon reduction dollars in Africa and Asia. Carbon developers are looking for charcoal stoves that are best deals: saving the most fuel, lasting as long as possible, and costing the least money. More fuel efficient charcoal stoves are attractive to projects worldwide. Aprovecho wrote a book called “Charcoal – Small Scale Production and Use” in 1983. We still have a lot of work ahead of us to completely understand charcoal stoves, but the following techniques help considerably in cooking food while using less fuel and burning up some of the escaping CO:

In tests at Stove Camp, an open fire consumed around 1200 grams of wood to complete the Water Boiling Test 4.2.2. If charcoal was made from wood with a 50% energy loss, a charcoal stove that used 300 grams of wood could still cut fuel use in half. If emissions of PM were reduced by 90%, as Dr. Bailis suggests, it’s not impossible that a charcoal burning stove could score very well on the IWA metrics.

That’s an interesting scenario to contemplate. 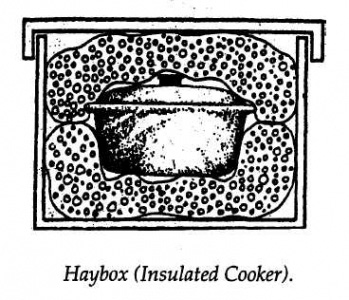 Retained Heat Cooker Design Principles
When food simmers in the pot, the fire is replacing the constantly lost heat. Most of the heat is lost through escaping steam and a smaller percentage is lost through the sides of the pot. If the heat were not lost but captured instead, then food would be simmered without using as much fuel. Placing the pot of boiling food in an airtight, insulated container can keep the food hot enough for the food to simmer to completion! A drafty and un-insulated house has to keep the heating stove going all the time during the winter for folks to stay warm. On the other hand, an airtight, well insulated house stays warm even when the heater is off. After a pot of food boils, the contents are close to 100°C. When the hot pot is placed in a retained heat cooker the food finishes cooking quickly and is served hot when people gather to eat. The retained heat cooker (or Haybox as it is called in some parts of the world) can save time, effort, and fuel freeing the cook from long hours of watching and tending the fire. In San Nicolas, Mexico, almost all of the younger women cooked pinto beans using a Haybox although uptake by older women was less frequent.

Here are a few design principles for an effective retained heat cooker:

1.)Air exchanges are more important than insulation
A.)Make the enclosure as air tight as possible
B.)Use R-7 insulation at a minimum

2.)The mass of the insulation and any mass within the envelope of insulation will rob heat from the pot of food unless the mass is above simmering temperatures.
A.)Keep the insulation and inner walls of the retained heat cooker as light as possible.
B.)To work well, insulation should not be less than R-2 per inch of thickness.
C.) Full pots of near to boiling temperature food retain more heat and cook food more effectively.

4.)Insulation loses its ability to slow the passage of heat when slightly moist.
A.)Do not allow moisture to contact the insulation.
B.)Use a moisture proof barrier between the pot and the insulation.
C.)Use closed cell insulation.

5.)The inner box will grow mold.
A.)The inner surface should be easy to clean.
B.)Cloth will become unsanitary if unprotected.

6.)To cook pinto beans:
A.)They need to be pre-soaked
B.)The retained heat cooker needs to be able to keep 5 liters of water above 90°C
for 90 minutes.