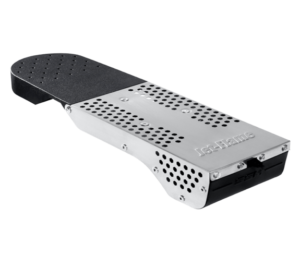 The SSM Jet-Flame in the CQC high mass rocket stove.

Starting in 2004, Aprovecho was hired by the Shell Foundation to adapt the Rocket stove in southern India. For the first time, ARC was hired as part of a project in which the reduction of harmful emissions was a major motivation. The effort was called the Breathing Space Program. Unfortunately, while generally liked by cooks, the insulated Rocket did not reduce PM2.5 enough to protect health. In African field tests, the insulated Rocket reduced emissions of PM2.5 by about 40% (USAID, 2008, 2010).  The stove needed higher temperatures and more mixing!

During the 2013-2015 DOE research and development project, air jets were installed in the floor of the combustion chamber in a Rocket stove resulting in dramatically reduced PM2.5 emissions. In 2018, ARC was hired by the Gates funded Global Health Labs tasked to co-innovate solutions to integrate fan-driven jets of air into a Rocket stove. The SSM Jet-Flame combustion chamber accessory was the result. See: www.Jet-Flame.com

A stove accessory that slides into a combustion chamber can be used in an open fire, clay/sand stoves, in Rocket stoves, etc. An add-on product is less expensive and fits into multiple applications. Hundreds of tests (that are ongoing) at the ARC lab reveal that ‘bottom air jets’ work to reduce emissions by super-heating the charcoal bed, helping the sticks to burn hotter, and by creating turbulence in and above the fire. The higher temperatures (over 900C at the bottom of the pot and around 1,100C in the fire) and increased gas velocity were seen to also improve heat transfer efficiency.

The Jet-Flame prototypes were field tested in Kenya so that cooks could help to design the final product. More than 100 samples have been distributed worldwide with support from Global Health Labs. There are currently five field test reports from Africa, Asia, and Central America. CQC has begun a large scale project in Malawi.

ARC is continuing to study the Jet-Flame and we are learning a lot about the relationship of temperature, excess air, rate of reactions, mixing, and residence time to the emission factors of CO and PM2.5. The following hot start test results show the performance of the stove in the context of the ISO 19867-3 Voluntary Tiers of Performance. The 90 % confidence interval for each metric is within 1/3 of the distance between the Tiers.

The Telkes Solar Cooker (It Works!)