We know a lot about smoke at Aprovecho and spend a lot of our time and energy working on solutions to keep it out of people’s lungs. But in the past few days we’ve gotten more personal experience than ever with extremely high and pervasive levels of PM2.5. Wildfires are burning hundreds of thousands of acres of Oregon forests and the wind is from the east, filling the western part of the state with heavy smoke. Yesterday at 6pm the Cottage Grove air quality monitoring station registered 807.1 µg/m3 of PM2.5! Fortunately, it’s currently at 232.2 µg/m3. Just breathing has been difficult, even indoors. 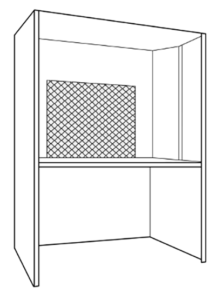 Some research done in 2017 taught us a simple and relatively inexpensive way to improve indoor air quality that has been impacted by wood smoke. An enclosure was built in the Aprovecho lab in which a standard 20” box fan pulled the smoke from a stick fed forced draft Rocket stove through a household furnace filter before it exited into the LEMS emissions hood. The PM2.5 (mg/min) was monitored with gravimetric measurement of PM2.5 during the high and low power phases of the Water Boiling Test 4.2.3. The average of seven emissions tests of PM2.5, with no filtration, was 7.5 mg/min. The average of seven tests after the gases and smoke passed through the $12 filter (3M 2200) was 1.5 mg/min. (Still, et al Energy for Sustainable Development, 2018)

With this box fan/filter idea in mind, we headed to the local Bi-Mart store and bought the highest quality 20” square home furnace filter available, it cost $16.99. It was taped to the back of our home box fan, paying attention to the airflow arrow, and left running to circulate the air. It helped immensely. An additional round fan ended up with two smaller filters taped together, since other people have learned this method as well and there were no bigger filters left. If you are in an area impacted by wildfire smoke, or even heavy air pollution on a regular basis, give this a try!

Smoke hoods have been installed in Nepal that can accommodate different stoves while diverting smoke up a chimney (Bates, E., 2007). Perhaps a forced draft smoke hood that captures PM2.5 can be used to decrease both indoor and outdoor pollution? Perhaps various stoves can be used under the same forced draft hood. Will this work well where women choose to cook on both traditional and improved stoves in the same kitchen? 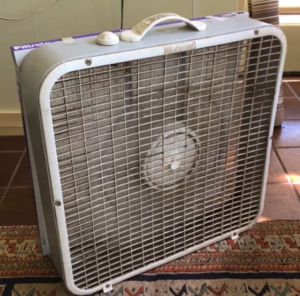 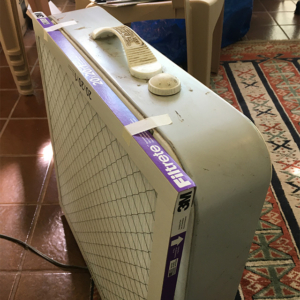 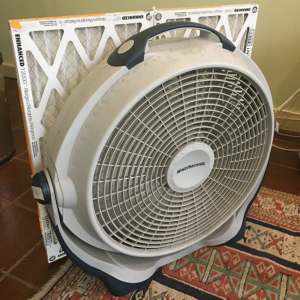