Almost 20 years ago, ARC was invited to a conference in Bonn, Germany to consider standards for cook stoves including emissions. In preparation, we met with Dr. Kirk Smith and his protégés at the University of California at Berkeley. We discussed the beneficial effect of increased air exchanges that decrease the concentrations of CO and PM2.5, helping a lot to reduce human exposure.

When the Air Change per Hour Rate (ACH) is doubled the concentrations of PM2.5 are cut in half, if the other variables stay constant.

It’s great that the air change rate is included in the ISO Voluntary Performance Targets! Stove project managers can measure the ACH where folks are cooking and use the information to get a better idea of what combustion efficiency is needed to protect health. Cooking outside or in kitchens helps a lot to reduce exposure to CO and PM2.5 as shown in the following chart:

ARC has been unpleasantly surprised on several occasions by the results of USAID field studies. For example:

At the same time, the bad news forced ARC to make better stoves! Thank you, USAID! For a list of more USAID Biomass Stove Field Studies, see our Publications page.

Next week in Part 2: the field informs the lab. 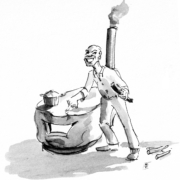 Having unbiased villagers or Dr. Jim Jetter test Aprovecho’s Lorena stove might have helped to reduce our embarrassment when again and again the open fire was proven to be much more fuel efficient! Inventor’s pride is a well-known human frailty. Creating a truth-telling team including all the folks concerned with a stove project helps to address the inventor who is doing what feels natural and right, but can be misguided. It happens at ARC frequently!

The ARC team has found that an engineer/researcher may know more about the thermodynamics of a stove, but the expertise of cooks, manufacturers, distributors, retailers, and funders in the stove project need to be included in the decision making process from start to maturity. Test, test, test!

As Dr. Kirk Smith said, “You get what you inspect, not what you expect”.

Our advice is to test everything frequently from all angles and try to respond to problems without inventor’s pride. It’s not easy! Cognitive dissonance messes up judgement all the time.

It’s easy to think, “I am intelligent, and make good decisions.” Admitting a mistake can threaten that image of self. It can be really hard to hear someone say, “Man, that Lorena stove is terrible! How could you have been so dumb?”

At Apro, we strive to use criticisms as a tool for improvement. Taking time to assess and define the problems, and consulting with our team about how to make improvements, moves us forward towards a more successful outcome. 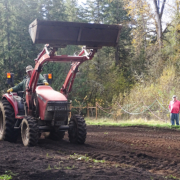 In 1976, Aprovecho was started in Guatemala after a terrible earthquake. The founders invented a stove called the Lorena as part of trying to help folks with their farms and forests. In 1981, Aprovecho came back to Oregon and bought 40 acres to learn how to maintain a forest, grow food, and make stoves. The hardware and software were OK but the wetware was not.

Sigmund Freud and Carl Jung broke up in 1913. Freud had picked Jung as his successor, but Jung made an unforgivable joke at dinner that ended their relationship. Freud was sure that the most powerful human motivation was infantile sexuality. Jung commented that eating must be at least equally important?

Sure, stoves are interesting, but food is certainly more important. I lived on a ranch in Mexico for eight years and when the food ran out we weren’t lighting fires to cook. We were out farming, hunting, fishing, or gathering edibles from the desert.

Growing food has always been important at Aprovecho. So has maintaining the health and productivity of our forest/woodlot. Oregon is cold and too rainy in the winter, and warm and too dry in the summer, so we’ve had to learn how to adapt to this place and how to grow food productively.

We are lucky that our garden at Blue Mountain is bottom land and is easily accessible. We buy inexpensive compost made from food scraps by friends in Eugene and our neighbor, Butch, bought a rototiller for his tractor a couple of years ago that he uses, free of charge, to till our ½ acre garden. Butch also gives us unlimited manure from his cows, so friendship has made growing food a lot easier.

Being friends with the folks on our road increases our feeling of safety, and friendly neighbors can agree to growing a wide variety of foods from garden to garden. Being friends is important on lots of levels and when food is involved, breaking up, especially because of an ephemeral idea, is something to be carefully considered.

Maybe better to share a slice of that good pumpkin pie? 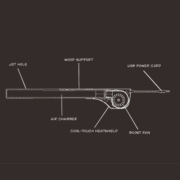 Dr. Larry Winiarski would remind me to imagine the languid rising of smoke from a cigarette when thinking about the velocity of natural draft gases in the Rocket stove.  I remember Larry saying that rising smoke is sexy, contemplative, and slow.

When Sam measures the dynamic pressure in the chimneys of household natural draft rocket cooking stoves he finds less than 0.01 inches of water column. Sam estimated, using the Archimedes principle, that a 10” inch in diameter chimney pipe at 700°C for its entire length would have to be 15 meters tall to generate 0.50 inches of water column. It’s amazing how powerful a little electric fan can be!

Kirk Harris writes that he has wondered how an exceedingly small pressure variance could drive the tall flames that we see in some stoves. He envisions fire gas as having exceptionally low density, very light weight, with very low inertia.  Kirk thinks of fire as like a “hole in the atmosphere”, easy to push around. His stoves use static mixers and small velocity induced natural draft pressure differences to mix flame that has been divided into thin sheets. Using these approaches, the Harris TLUD stove achieves less than 1mg/min for PM2.5 when burning pellets.

The Jet-Flame, on the other hand, uses very high-pressure jets of air that blast up into charcoal and then mix wood gas and air as the jets pass through sticks on fire. The bottom air technique requires the equivalent pressure of a 15-meter-high, extremely hot chimney to lower emissions to about the same degree as the Harris stove. It is interesting to think of these two stoves side by side, representing quite different approaches to clean burning. The Harris stove is gently manipulating flame as easy to move around as a hole in the atmosphere while the Jet-Flame is dynamic, a bit loud, creating hot jets of air that drill holes in burning wood.