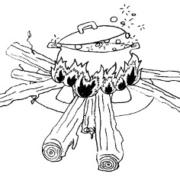 When the air exchange rate is doubled, the concentration of smoke is reduced by half. The average house in low middle income countries is estimated to have around 12 air exchanges per hour (ISO 19867-3). When ARC measured the air exchange rate outdoors in a gentle breeze it was found to be about 120 per hour. Exposure to smoke could theoretically be dramatically reduced by moving outside.

Changing stoves costs money and the transition to an improved stove is often a time consuming process. ISO reports that even stoves with chimneys (that often leak) only reduce concentrations of smoke in houses by around 75%. Experimenting with increasing the air exchange rate is probably the most cost-effective intervention to protect health.

When we went to villages where women cooked outside, Dr. Winiarski would frequently ask the women if digging a well, etc. might be more important than new Rocket stoves. That is one of the things that we loved about Larry!

ARC engineers rely on feedback from field testing to improve the real-world function of biomass cooking systems. Sometimes the news is challenging, but in this instance the news was very encouraging!

Kakuma: “Tests conducted in Kakuma overall yielded very positive results. The participants confirmed that cooking time is faster, fuel is saved, and water is conserved even if only by a scant amount. Participants agreed that SuperPot is a much better option than the regular cooking pots not only because of the efficiency but they are apparently also easier to clean, saving more energy and water.”

Dadaab: “Smoke expelled from the sides of the pan and does not enter the pot thus no change in the smell and taste of food. SuperPot cooks food faster and thus less firewood used. Less usage of firewood and faster cooking would mean less protection incidents, more time for infant/child care. With the SuperPot there was less heat loss and firewood consumption by wind as most of the surface was covered with the pan unlike the traditional pot.”

Batil: “Significant differences in cooking time were noted: for CSB++ (corn-soy blend flour) the Stovetec SuperPot cooked 8 minutes faster than the local pot; for cereal, there was a difference of 4 minutes. With pulses, super pot cooked faster by 5 minutes. Overall, Stovetec is time efficient. The fuel savings are particularly impressive.”

Yida: “Together, both tests saved women 20 minutes in overall cooking time. According to the participants, this time saved ‘can be used for other productive household economic activities or be dedicated to childcare which will effectively improve the nutrition and health status of the children and the entire household members.'”

East Sudan: “Testing was conducted at hospital kitchen inside Kilo 26 hospital complex by four people including two cooks and the HAI nutrition coordinator. 500g of lentils were cooked in 750ml of water in both pots on improved stoves. The super pot cooked the lentils in 27 minutes, as opposed to aluminum pot, which took 34 minutes, for a difference of 7 minutes.”

Assossa: “Results indicate that community perspectives are positive for the StoveTec super pot. The water boiled faster in the super pot by 3 minutes and the lentils were cooked 15 minutes earlier on kerosene stove, while also being 9% more fuel efficient than the regular pot. When testing CSB on kerosene stove, super pot was 4% more fuel efficient and saved 7 minutes of cooking time.”

Hilaweyn: “Tests were ran in Buramino Block 13 and Buramino Block 24 Line A with woman groups. In Block 13, the women tested cooking time for 500g of rice over an improved stove (with windshield). The Stove Tec pot cooked the rice faster by 8 minutes. In Block 24, women cooked 500g of lentils over firewood. Stove Tec pot out performed local pot only by 2 minutes. Neither water used nor fuel consumption were measured.”

“Results indicate that the super pot is fuel efficient, effective in saving time, safe and well accepted by the community.”

In their summary report, the UNHCR Food Security and Nutrition Unit advised “Procurement and distribution of SuperPot in select humanitarian contexts within priority countries according to needs of the most vulnerable households.”

To read the summary report: http://aprovecho.org/publications-3/, scroll down to “Pots” section. 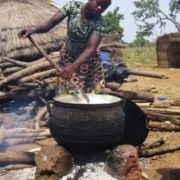 The air in a kitchen has to be very clean to protect women and children from multiple diseases. Unfortunately, moderate amounts of smoke seem to damage health almost as much as higher concentrations.

As exposure rises from zero, the chance that a child will get pneumonia increases sharply and then levels off so that indoor air with 200μg/m3 PM2.5 is almost as dangerous as air at 400μg/m3 (Burnett et al., 2014). The World Health Organization Intermediate Guideline for PM2.5 is 35μg/m3.

In order of effectiveness, when cooking in a kitchen, health interventions seem to be:

Unvented Rocket stoves, and other ‘moderately clean burning’ stoves (such as a carefully tended open fire with pot skirt), emit much too much smoke and gas to protect health in houses.

Cooking outside, especially upwind of the fire in a bit of breeze, is highly effective in lowering harmful concentrations of PM2.5.

Cooking outside seems to be a first choice intervention, when applicable. Even ‘moderately clean burning biomass stoves’ can be used when the cook is upwind of the fire in a bit of a breeze, meeting the WHO Intermediate Guideline for PM2.5.

Of course, cooking with a low emission stove is preferable, when possible!