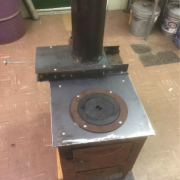 How to Install a Catalyst in an Existing Heating Stove

When starting a cold stove the catalyst is disengaged from the gas stream by pulling on a steel rod. A green light will indicate when the stove gases are above 600F. The catalyst can then be engaged by pushing in the rod.

In one experiment in the ARC lab the installed catalyst reduced the emissions of PM 2.5 in a simple steel box stove made in Mongolia to about 1g/hour which meets the 2020 EPA Heating Stove Standard.

The following is a summary of a January/February 1983 article from Mother Earth News that describes design principles for installing a catalytic converter in a wood burning stove:

Testing Stoves: Before Not After Dr. Tom Reed: The Father of Clean Burning?
Scroll to top