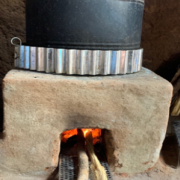 Quoting from the Abstract:

Incorporating jets of forced air into biomass cook stove combustion has been shown to potentially decrease harmful emissions, leading to a variety of designs in recent years. However, forced draft stoves have shown mixed success in terms of real world performance, usability, and durability. The Shengzhou Stove Manufacturer Jet-Flame forced draft retrofit accessory was developed by the Gates funded Global Health Labs and ARC, to implement forced jets of primary air at a low cost into a wide range of types of cook stoves using a small 1.5-W fan housed in a low-cost cast iron body to be inserted beneath the fuel bed of a biomass cooking fire.

This research sought to quantify the potential efficiency and emissions performance impacts of the Jet-Flame when installed in six different types of biomass cook stoves (three open or shielded fires and three rocket stoves) versus the natural draft performance of each. The effect of the operating fan voltage was also measured. A series of tests following a modified ISO 19867-1:2018 protocol were performed in the laboratory using the Aprovecho Laboratory Emissions Measurement System (LEMS) equipped with additional oxygen and temperature sensors.

Results for each stove, carefully tended with a single layer of sticks, showed that the global average PM2.5 reduction with the Jet-Flame was 89% relative to the natural draft cases, with larger relative improvements seen in the most rudimentary stoves. CO was reduced by a global average of 74%, reaching Tier 4 or 5 for all stoves. Thermal efficiency was also improved by 34% when calculated without taking into account the energy content of the remaining char (or 21% with char), illustrating the value of burning char to provide cooking energy rather than leaving it unburned in the combustion chamber as is common in many natural draft stoves. Time to boil was also reduced by 8%.

In addition, adjusting the voltage of the jet-flame assisted in modulating firepower, possibly improving the usability of the stove.

Is Forced Draft Really Needed in the TLUD?