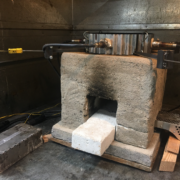 In our newsletter “Making It Real,” we described how feedback from the field in Rwanda suggested that the Jet-Flame’s power cord would last longer if the whole device was inserted from the side of the combustion chamber. (It was originally designed to go through the door, with the sticks placed on top.) So of course we ran some tests, and discovered more benefits.

Is the Jet-Flame, when inserted into the combustion chamber from the side of the CQC stove, as effective in reducing emissions as when it enters through the fuel door?

Yes, performance seems to have even improved a bit. After testing the Jet-Flame with side entry, it seems that it’s better to get the hot metal out from under the parts of the fuel that you don’t want to heat up. To burn cleanly, natural draft Rockets like to burn something like 8cm of the end of the sticks. Instead of laying the entire length of the sticks on the heated metal of the Jet-Flame, the side entry only exposes a limited amount of the sticks to high temperatures.

As seen in the photo, the sticks are now supported by a white homemade high mass brick and only the tips are exposed to Jet-Flame heat well inside the stove. It’s nice how a suggested change from Jean Marie Kayonga in Rwanda ends up having some unexpected benefit, not just better protecting the cord. Thanks again, Jean Marie! www.Jet-Flame.com

The time to boil, thermal efficiency, temperature in the combustion chamber, CO, and PM were improved with side entry while firepower rose. Excess air fell from 3.38 times stoichiometric to 2.57. I liked operating the stove because the sticks seemed to burn more at their tips as Dr. Winiarski described in the Rocket Design Principles. See: http://bioenergylists.org/stovesdoc/Still/Rocket%20Stove/Principles.html

How Do We Know?

International Support for Cook Stoves and Climate!﻿
Scroll to top