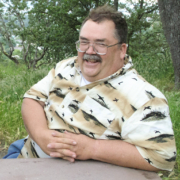 Dr. Larry Winiarski, the Technical Director of Aprovecho Research Center (ARC), died this past week at the age of 81. In the 1980’s and 90’s, Dr. Sam Baldwin defined how to improve heat transfer efficiency in biomass cook stoves (pot skirts, etc.), Dr. Tom Reed created the TLUD, and Dr. Winiarski invented the Rocket stove. The saying “We stand on the shoulders of giants” certainly applies to the stove community.

Larry led teams from ARC around the world starting in Central America, where the plancha stove was evolved, after he found that a floor tile called a baldosa made a long lasting and relatively low mass combustion chamber that was surrounded by wood ash, a great natural source of refractory insulation. Larry discovered that Rocket type stoves, like plancha stoves, can be described by ten design principles and that these simple engineering principles could be taught to indigenous people, mostly women, who were the experts in using the stoves. My memories of Dr. Winiarski, who was born in Nicaragua, are often about him having a wonderful time speaking Spanish as stoves were constructed and flavorful food prepared.

It is not an exaggeration to say that Larry had a heart of gold. He picked up sick kids and walked from the city dump in Managua to a distant hospital. He slept on cement floors for months at a time in Haiti. Larry lived as others lived in Africa for years and because of his character was loved and respected in villages worldwide. His Rocket stove found a place in people’s homes in the same way that Larry was cared for, accepted, and loved by strangers. Larry is missed by thousands of friends and he was blessed with a life well lived.