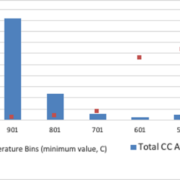 High temperatures in the combustion chamber seem to have both positive and negative effects on emission rates of biomass. Higher temperatures lower the residence time needed for more complete combustion. At the same time, especially with dry wood, the rate of reactions (how much wood gas is being made per unit of time) is increased. If wood gas is made too quickly, some of it can escape unburned. Our experience has been that in a hotter combustion chamber the fuel must be metered into the fire more slowly to lower emissions. In Rocket and TLUD stoves, the rate of reactions must be controlled to eliminate smoke.

Boman (2005) reports that temperatures above 850°C in a 5kW combustion zone combined with air rich and well mixed conditions for 0.5 seconds resulted in an almost complete depletion of particulate matter. The use of insulation in Rocket stoves can create a combustion zone with temperatures above 1,000°C. Forced draft TLUDs can generate similar temperatures in the secondary air mixing zone above the fuel bed.  Interestingly, when temperatures are around 850°C the near complete combustion of well-mixed carbon monoxide and particulate matter seems to require short residence times. Both forced draft Rocket and TLUD stoves can minimize the emissions of products of incomplete combustion even though the residence time is very limited.

Recently, we ran a series of fifteen experiments trying to optimize performance in a low mass Rocket stove with Jet-Flame. Since we were testing with dry wood we had to be careful not to over insulate the combustion chamber. Insulation made the whole length of the stick catch on fire increasing the rate of reactions and firepower.  When more than 8cm of the stick was burning more mixing was needed to achieve close to complete combustion. When only the tips of the sticks were on fire the metering of woodgas into the fire was slower and less mixing was required.

As seen in the following graph, the emissions of CO were again shown to be reduced at higher temperatures. As a rule of thumb when designing a stove, we try to create temperatures above 700°C about 6cm above the fire, at a minimum.

ETHOS is Great!
Scroll to top