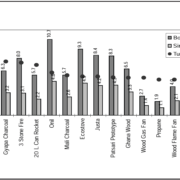 The ARC/EPA 2011 book “Test Results of Cook Stove Performance” compares performance and emissions, including turn down ratio and firepower, from survey of 18 stoves. Firepower is a measure of how much energy is released per unit of time. More energy is required to quickly boil water. Less energy is needed to simmer food.

The most effective cooking stove should be fuel efficient at both high and low power. The ratio between high and low firepower is called the turn-down ratio (TDR). It is a measure of how well the stove can be “turned down” from high to low power.

A TDR of 2 means that half as much fuel was consumed while maintaining a simmer, compared to bringing water to boiling. Cooks usually appreciate a stove that is capable of both high-and low-power operation. Many foods will burn if the heat can’t be reduced enough.

It is interesting that the liquid-fueled stoves were generally low powered, at less than 2kW. Most of the wood burning stoves ranged from 8kW to around 6kW. In Mexico, gas stoves can have a hard time cooking tortillas.

The chart shows the average high firepower and the low firepower for each stove. It should be noted that in these tests the pot was uncovered, which increases the energy input needed to maintain the water at simmering temperatures.

Learning from the Three Stone Fire
Scroll to top