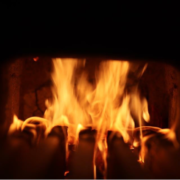 Sometimes it’s good to step back and review the very basis of stove work – fire. Samuel Baldwin gives a good description of how wood burns in his book “Biomass Stoves: Engineering Design, Development, and Dissemination” (1987).

“The combustion of wood and other raw biomass is very complicated but can be broken down crudely into the following steps:”

“The solid is heated to about 100ºC and the absorbed water is boiled out of the wood or migrates along the wood grain to cooler areas and re-condenses. At slightly higher temperatures, water that is weakly bound to molecular groups is also given off.  Heat transfer through the wood is primarily by convection.”

“As the volatiles escape the wood, they mix with oxygen and, at about 550ºC, ignite producing a yellow flame above the wood. Although radiant heat from the flame itself (not counting radiant emission from the charcoal) accounts for less than 14% of the total energy of combustion, it is crucial in maintaining combustion. Some of the radiant heat from this flame strikes the wood, heating it and causing further decomposition. The wood then releases more volatiles, which burn, closing the cycle. The rate of combustion is then controlled by the rate at which these volatiles are released. For very small pieces of wood, there is a large surface area to absorb radiant heat compared to a little distance for the heat to penetrate or for the volatiles to escape. Thus, fires with small pieces of wood tend to burn quickly. This is also why it is easier to start a small piece of wood burning than a large thick one. A thick piece of wood has less area to absorb the radiant heat from the flame compared to the greater distances through which the heat and volatiles must pass within the wood and the larger mass that must be heated.”

A Culture of Daily Experimentation﻿