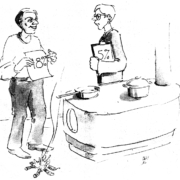 When Dean Still came to Aprovecho in 1989, Dr. Larry Winiarski asked him to compare the thermal efficiency of the Lorena stove and the Three Stone Fire. The testing revealed a problem for the ARC staff when our Lorena used three times more fuel than a carefully operated open fire!

Half of the staff, who had written books about the Lorena and taught thousands of people about their invention, were never convinced that a problem existed. The other half were embarrassed and became fervent believers in Dr. Kirk Smith’s famous saying that “You get what you inspect, not what you expect.”

Making a public mistake pushed a reconstituted ARC to proceed more slowly, to challenge speculation, and to try to generate reliable data. We learned that a lot of local knowledge is required to take successful products to market. Evidence can help to overcome inventors’ pride, cognitive dissonance, and the financial cost of changing directions. At the same time, inventor’s pride, cognitive dissonance, and the cost of changing direction also influence decision making.

No More Simmering!
Scroll to top