Smoke in a kitchen? Tiers of Performance? 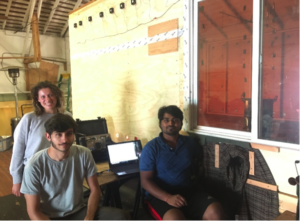 Last summer we finally got around to building a real Test Kitchen. The World Health Organization used a single zone box model ran as a Monte Carlo simulation. The box model is well known to badly predict the smoke distribution in a room, but it is easy to implement. The model assumes that smoke is evenly distributed in each cubic meter of the interior. But anyone who has watched smoke in a room knows that smoke rises and tends to accumulate near the ceiling.

So we decided to investigate what smoke does in a kitchen. We built an air tight 30 square meter kitchen that has PM sensors in each cubic foot of air space. We spent a long time calibrating the room to accurately determine the air exchange rate. It’s important to know what actually happens to smoke in a kitchen because the ISO 19867-3 Voluntary Tiers of Performance are based on the Monte Carlo box model simulation. Good to know what really happens! Maybe low cost interventions like increasing the air exchange rate can help to significantly reduce exposure?

This summer three University of Dayton interns added to the data generated last year. The analysis is continuing but generally: