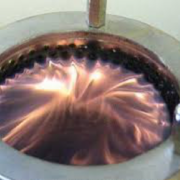 Forced draft mixing with preheated jets of primary air reduced emissions of PM 2.5 by around 90% in our stove tests with the Jet-Flame. Would adding secondary air jets further decrease emissions?

Lefebvre, Vanormelingen, and Udesen examined secondary air jets air in cylindrical combustion chambers and describe most successful patterns of penetration depth. Jet penetration lengths approaching the middle of a cylindrical combustion chamber resulted in a maximum reduction of PM2.5 emissions. An increase in the number of jets created more thorough mixing. It was important to have the jets meet in the middle, but with minimal necessary force, to ensure highest temperatures and highest velocity of hot gases to the pot.

Forced draft secondary air jets can decrease the upward draft in a cylinder. Jets of air aimed horizontally into the flame most efficiently create mixing. But even when aimed upwards toward the pot they create a ‘roof of air’ that slows the draft by creating a high-pressure front.

Regardless of the velocity of secondary air flow rates, or the angle at which air is injected into the combustion chamber, supplying secondary air also tends to significantly lower the temperature. For this reason, using a minimal amount of air was found to be best. There is a reported balance resulting in optimized mixing, draft, residence time, and temperature. (Lefebvre, 2010) (Vanormelingen, 1999) (Udesen, 2019)

How Do We Add Secondary Air Successfully to Rocket Stoves?

One obvious difference between TLUDs and Rocket stoves is the large fuel door in the side of the Rocket stove. A TLUD is an open topped cylinder with a small amount of primary air entering the batch of fuel from below the packed fuel bed. In the TLUD, the fuel is initially dropped into the cylinder, while in a Rocket stove horizontal sticks are pushed into the combustion zone through a fuel door. The pressure/volume of secondary air jets introduced into a Rocket stove may be limited because the high-pressure front can create a backdraft that sends smoke out of the fuel door.

Supported by funding from The Osprey Foundation, ARC is currently experimenting to determine: 1.) How much pre-warming can be achieved and 2.) What is the most effective pressure/volume for secondary air jets in a forced draft Rocket stove.

Win a Rainbow Coalition of Friends