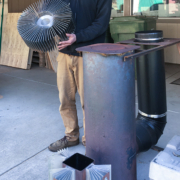 We used to have problems with the upper portion of the sticks catching fire in Dr. Winiarski’s down-feed downdraft Rocket stoves. The draft had to be strong, and the sticks at the right moisture content and size/weight to burn up completely without any smoke back drafting up into the room. The vertical metal feed tube got too hot and could catch the top part of the sticks on fire, overcoming the draft moving into the stove. (Usually something like 3 MPH.)

When Sam Bentson and Karl Walter were making a 20 watt thermoelectric generator (TEG) for the EPA SBIR supported Integrated Stove project we had the same problem, until Sam added aluminum cooling fins to the top of the vertical feed tube, as seen above. The team had previously designed and built the cooling fins unit that Sam is holding in the photo to cool the cold side of the TEG. I was amazed how well cooling fins work!

But then I remembered how small the radiators are in automobiles with huge horse powers. I saw that Sam and Karl had added a fan to their radiator to make sure it could dissipate the 1.5 kilowatts running through the hot side of the TEG. Adding fins to parts of a stove that could use more dissipation of heat brings to mind several possible applications: the heat exchanger cylinder in the photo, a chimney that has high exit temperatures, or the outside of a metal combustion chamber to preserve the metal. But I would not use fins where they can get dirty! They don’t work, for example, on the bottom of a cooking pot where soot quickly fills the space between the fins. (I didn’t think of this before we tried it.)