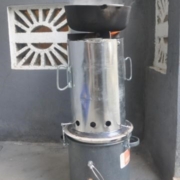 In 2011, Dr. Paul Anderson described how the made charcoal in a TLUD could drop into a charcoal stove base and then be used to cook food. The top of the TLUD stove was removed after the charcoal was made and the pot was placed on the lower base to continue cooking. ARC used the same idea in a TLUD stove that was tested by Jim Jetter, but the wood burning and subsequent charcoal burning happened in the same combustion chamber. The TLUD was shorter, so the lower firepower in the charcoal supplied enough energy to a covered pot with a tight skirt to keep simmering. The ARC TCHAR stove was clean burning and scored well in a series of tests. (Jetter, et al., 2012, Environmental Science & Technology 46(19):10827-34).

Using the made charcoal to simmer food to completion increases thermal efficiency. In cities where biochar may be less desirable, a known amount of fuel can bring the food to boil (burning the wood) and then gently simmer the food until it’s done (burning the made charcoal) without much tending. To preserve the biochar for agricultural use the primary air that goes up into the batch of fuel is limited and the fire is extinguished. In a TCHAR more primary air helps to decrease the smoke made during the transition from wood to charcoal burning and helps the charcoal to completely combust.

The Turn Down Ratio in a 2021 ARC TCHAR is about 5 to 1, so the pot needs a lid and a tight skirt to keep boiling. Using 700 grams of biomass pellets the stove boiled five liters of water in 27 minutes and kept boiling for two hours (covered pot/tight skirt). The TCHAR is another TLUD variation and, who knows, may be useful somewhere?