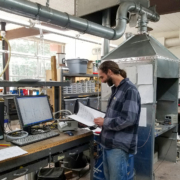 Having an emissions hood allows ARC to make more detailed observations. We try to do one ISO 19867 test every day, establishing an in-house culture of data driven inquiry. Now, having a hood isn’t necessary for creating amazing stoves. Larry Winiarski, Tom Reed, Paul Anderson, Kirk Harris, and many other people have spent happy hours tweaking prototypes that then worked better and better. But when you get to the point where it’s hard to see the smoke, visual inspection doesn’t work as well. In the modern world, health requirements are violated by fairly invisible amounts of PM2.5. Of course, the same thing goes for CO which is odorless and invisible.

That’s why we offer free access to serious stove developers. Kirk Harris recently visited the lab to tune up his latest TLUD. We have a nice, warm cabin for him and daily access to one of our two emissions hoods. The cafeteria is open and Kirk brings food to prepare. If we are lucky, we hear him playing his flute. Dale Andreatta makes an almost annual visit and then likely climbs some mountain and goes somewhere to watch trains.

We’ve recently added 4 oxygen sensors and 4 temperature probes to the data generated every second for greater depth of detail. Detailed observations help to see if one set of information had an effect on another.  For example, when temperatures rose at 3” up from the floor of the combustion chamber did CO or PM2.5 change at the same time? Was a significant effect on CO or PM2.5 seen above a certain temperature? What happened with the temperature probe data taken at 4” up from the floor? And more and more. The process of learning is data driven which makes a black box theorist happy.

In so many ways, the detailed observation of what is happening in a biomass stove is in its infancy. Establishing a culture of daily data generation at our lab (3 hours) is getting us closer to having “observed the natural process.” And, it’s Christmas fairly frequently when a statistically significant relationship is observed. 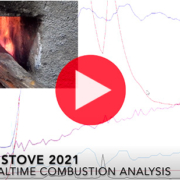 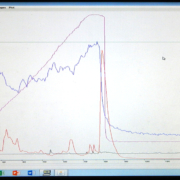 David Evitt, ASAT COO, and Sam Bentson, ARC GM, have been adding capacity to the Laboratory Emissions Monitoring System (LEMS). So far, four oxygen sensors, temperature probes in the fire and under the pot, and a velocity sensor give us a clearer picture of what’s going on in a stove. Knowing PM2.5, CO, CO2, and firepower at the same time, combined with the improved testing protocols in ISO 19867, is making us more confident that iterative improvement can be accomplished relatively quickly.

Starting in early December, Dean Still and a research assistant will be doing 20 tests per week to create an optimized forced draft insert that cleans up the combustion of found biomass fuels and improves thermal efficiency in open fires, high mass, and Rocket stoves. A screen in the hood showing real-time data helps reduce the needed repetitions to achieve statistical confidence.  The 90% confidence interval has to be less than 1/3 of the range of the Tier that contains the conservative bound of the confidence interval. When Tier Confidence Interval Range is equal to or less than 0.33, the number of tests is deemed sufficient to meet the Aprovecho data repeatability quality standard (seven to nine tests each for high, medium, and low power are usually sufficient).

David is in grad school with Dr. Nordica MacCarty at Oregon State University and the ARC lab is supplying them with information. We’ll keep you in the loop as we make discoveries. Part of the goal is to keep the optimized insert as close to a $10 wholesale price as possible. 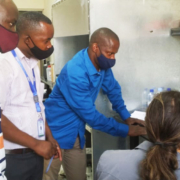 Aprovecho’s General Manager Sam Benston recently returned from a trip to Rwanda, where he helped to set up a new ISO compliant cookstove lab. Here are some photos and information from Sam about his work there:

I was installing the LEMS (Laboratory Emissions Monitoring System) and PEMS (Portable Emissions Monitoring System) and the rest of the new ISO 19867 cookstove laboratory at the Rwanda Standards Board in Kigali. The lab started as an empty room full of equipment in boxes. I trained the laboratory staff on the set-up and use of the equipment for cookstove evaluations according to ISO 19867. Shortly after I left there was a Grand Opening to celebrate on the ISO’s World Standards Day. Here is a twitter link with photos:  https://twitter.com/REMA_Rwanda/.  Our new PEMS with the battery powered gravimetric system is visible.

Aprovecho provides a turnkey cookstove testing laboratory which is useful for cookstove performance certification, design, and basic research. The lab is centered around the ARC manufactured LEMS. It consists of a gas and particle analyzer with a pump and filter PM2.5 sampler, an emissions collection hood, and a dilution tunnel. The LEMS is the result of 20 years of development that started due to the lack of affordable and easy to use equipment suitable for cookstove emissions monitoring.

Aprovecho develops its equipment as the need arises during research and development activities that occur in its laboratory. Aprovecho’s ability to commission the other instruments that makeup a cookstove testing laboratory is the result of a similar depth of experience.

It was remarkable to observe how the Rwandan people have protected themselves against COVID. It was a great honor to be part of their community at this time.

Testing was designed to occur before manufacturing. 42 years after the International Standards were published, how many stove projects are spending a year or two in their project areas to make sure that the cooks love the intervention and that it decreases pneumonia before starting to make stoves?

Testing the Efficiency of Wood Burning Cookstoves: International Standards was published in 1985 and was the result of three international conferences. The purpose was to describe three tests that would enable stove projects to create interventions that met their goals. Testing was intended to happen before manufacturing to make sure that the stove and the entire intervention (a lot more than the stove!) works to save fuel, decrease pneumonia, protect kids from burns, or whatever is important in the context.

Using stove testing after the stove is manufactured to see if project goals are met is a great idea, too. But, bringing a stove into a village without good information showing what is needed in the cultural context to accomplish goals is obviously foolish. The WBT, CCT, and KPT were designed to result in reliable data to try to make sure that project was proven, before dissemination of the stove, to be successful.

The recent pneumonia study in Malawi showed that the new stove was used less than 1/3 of the time for cooking. Prior studies using the WBT, CCT, UCT, KPT, etc. with emission equipment could have been used to create a successful intervention that then would have been followed up to analyze results. This approach uses testing to identify the interwoven factors involved in the design of a useful medical intervention. When ARC created a Rocket stove for the Shell Foundation project in India it took about a year with months spent in villages (and in the lab) to discover what made both cooks and funder satisfied. We were trying to make sure that the consumer would love and buy the product and that it was significantly improved before it was made available on the market.